I've played more D&D in the last calendar year than I have ever played in my whole life.

I ought to clarify. D&D was my first RPG. I bought the GW boxed edition back in 1978, I think during the summer holidays before going to secondary school. But my first attempt at playing it was a disaster. I recall inviting my friend John around and us trying to get our heads around the rules. We failed – I particularly remember being stumped by a paragraph that explained how you'd get your party together by putting a notice in a local tavern and seeing who responded. 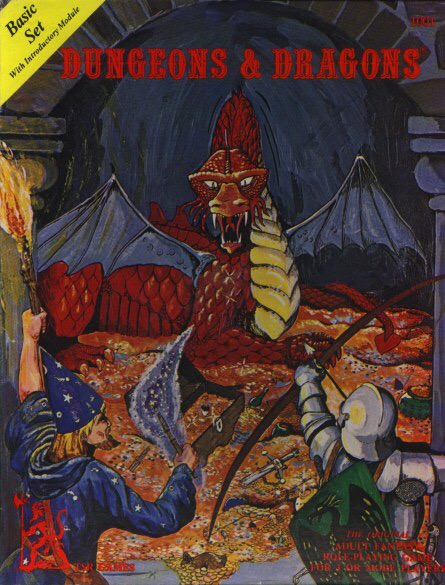 So we ran around the garden instead, shooting each other with pointed fingers. (No kids ever play "War" now – have you noticed that? Its probably a good thing.) When I got to school however, I found a "Wargames Club" that introduced me to D&D (actually it was AD&D, causing me to ask for all those hardbacks for Christmas). But we only played a few sessions of that before somebody brought Traveller into the room, then there was RuneQuest, Toon and a whole bunch of others, and those AD&D books I got for Christmas turned out to be a waste of various family members money.

We developed a sniffy attitude to D&D, with its levels and lack of skills. Traveller and RuneQuest (actually Call of Cthulhu) were the thing. And then when they brought out a second edition we were able to blame TSR for wasting our money on those unplayed AD&D books, and turned our backs on them.

I never played another game of D&D. (Actually I remember taking a school team to Reading University for a D&D competition(!) at GenConUK. We were hammered, out in the first round.) So I missed out on all the "edition wars" of third, 3.5 and fourth. But I was invited to join a campaign (which was actually reaching its last session when I finally managed to get there) using the then newly published fifth edition rules. No longer relying on grandparents to buy my D&D books I bought the Players Handbook on a whim. I'm glad I did, because every other player at the table, including the GM, had pirated PDF copies of the books.

I really liked fifth edition, levels and all, and even though that campaign was finishing as I joined, I got in on the first session of a new, weekly, campaign last year. These regular sessions are such great fun, and totally outnumber all my other sessions with other systems. My elf barbarian is fifth level now, and has recently discovered the pleasure of wearing clothes (much to my fellow players' relief).

It's not the ONLY game I've been playing though: I joined that particular group because they were playing Feng Shui 2, and my somewhat irregular get togethers with my oldest group have involved L5R, Song of Ice and Fire, Pendragon, Nights Black Agents and Coriolis. I've even been on line to run a session of The Warren (more on this in a later post).