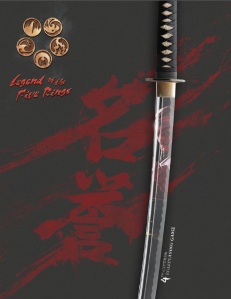 Day 14: Which RPG do you prefer for open-ended campaign play?

If only. If only I had the time, and some of us could have the commitment to the sort of regular session that enables a truly open-ended campaign. My first thought was “well, I wouldn’t be running it, that’s for certain”. But then, I realised that that might be the challenge. What is I was running an open-ended campaign? How would I do it? I’m a low prep GM (and player) now, how could I sustain a never ending story?

I’d want a world that I understood well enough to come up with stuff on the fly. I’d want a world where my favourite antagonists (other people) could reign supreme, but with capacity for monsters and dungeon-delving when the mood took the table. And that world exists. And its called Rokugan.

Legends of the Five Rings is an almost perfect game for open ended play, as it evidenced by the “living” nature of a game world that evolved over years of AEG’s custodianship of the game(s – there was a CCG as well). What I don’t want are lots of splatbooks, and they did make a few over the years, but the core book is complete enough that I don’t think you need any. I would recommend the Atlas of Rokugan though, for reasons I explain here. With those two books you could play for years and years and years. The mix of politics and action, the structure of clans and (can’t beleive I’m about to say this) levels and the prospect of marriage and generational stories, all lend themselves to open ended play.

In fact I do have an ongoing campaign, in my head.

I ran the third edition adventure, the Hare Clan, for a group at a university based club. It can be a bit railroady, but using the (I think lovely) battle rules in the 4th Edition corebook, we ran well and truely off those rails.  A lucky shot from a player character (lucky even to be able to take it, never mind the exploding dice damage) took out the Scorpion general, defeating the overwhelming army and saving the Hare clan. The players were keen to find out what happened next and so I took elements of the follow-up adventure Bells of the Dead, and to uncover a Rokugan wherein the scorpion were disgraced, Crane and Lion sharing governorship of their lands and out players uncovering Kolat plots to try and restore Scorpion honour. The Kolat had been identified and their champion defeated (at the cost of two PCs), but we never got to expose them to the Emperor.

There’s adventure to be had … one day.