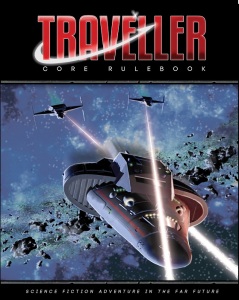 Day 18: Which RPG have you played most in your life?

Oh? You want more? OK I can’t quite remember, but I think it was the second RPG I ever played. (Runequest might have pipped it to the post, but I don’t think so.) I do remember that first time creating a character, in the “new dining hall” at school, where our quaintly named “wargames club” met. It was 1978, so I was expecting laser swords and evil empires. I don’t recall what I ended up with exactly (an engineer?) but I do remember not being able to afford a laser sword and buying a cutlass instead.

AD&D was discarded, and instead we explored Azhanti High Lightning. I killed a character trying to recreate a BattleStar Galactica Viper launch from that ship, and being told I should have opened the blast door at the other end of the hanger.

I got better at it. And we played a lot. Andy B became our regular GM. Through the lean years, when our group was scatter across the country and I didn’t know any other gamers, we might play only two or three times a year. But those get togethers we usually Traveller.

We played in the Imperium, in 2300, in a home brew setting based on Revelation Space. We played, low-born, high-born, Cossacks, customs-men, businessmen, Vargyr trekkies and cyborgs. We played little black books, New Era, MegaTraveller, the whole lot.

It was Traveller that brought in into my local gaming scene. I heard a plaintive complaint that young people didn’t want to play Traveller, on a podcast, and tracked down the correspondent, joining a University based club to play first a female pre-gen in the railroady Secrets of the Ancients campaign and then an Aslan black panther (in a political sense) in a more sandboxy adventure. I’ve been gaming locally every week since.

I bought my first rulebook only last year, and even then only in PDF. I’ve only played, never run. And there something about the system, it’s relative simplicity, and it’s flexibility that as a player I never felt a need for the rules or for splat books. I got given a second hand Aslan book once, and a dodgy PDF of the first Mongoose edition, so it was guilt that made me buy the second edition. The creators of a game that bought me so much pleasure deserve a few creds.

Everyone should have a copy. And the second edition Mongoose version (pictured) is the perfect distillation/evolution of the rules essentially the same as the very first GDW edition, except in all the places where the GDW version was crap. I played in a short campaign as a crippled Vargyr astrogator, with a massive medical debt to pay. Only Traveller can do this.