Please, please, please, graphic designers and layout artists (or rather, I suspect, commissioning editors), will you just STOP faffing about with overly fussy layout?

Just because the costs of full colour production have come down to meet the price that RPG geeks seem willing to pay for books, it doesn’t mean we need to have colour splashed across every page! Something started going wrong with RPG layout design in the nineties, but I’m not going to look back on the past – rather I’ve going to survey some of the books I’m using now to make my point. Which is, I’ve spent forty years imagining fantasy worlds, I don’t bloomin’ need the page to look like parchment or vellum to evoke the spirit of the game.

RPG books are technical manuals. and you don’t see Haynes setting their text and diagrams against a background of vinyl upholstery to “evoke the spirit” of a Mark II Ford Escort. I want to understand the rules. I want to be able to flick back and forth while I’m learning the game. I want to look stuff up quickly. I might well want to print some pages out to share with players at the table. I want CLEAR, CONSISTENT, INTUITIVE DESIGN. Is that too much to ask?

Apparently so. I have a lot of love for Coriolis, but why oh why is it all so black?!

Yes, I get “Darkness Between the Stars” and all that but even the main body text is printed on blue. And what’s with all those frames around the body columns? What an extravagant waste of space. The book would be a hundred pages shorter if it was printed black on white.

It seems to be a particular problem for science fiction RPGs. Traveller in its very first edition was the epitome of elegant simplicity. The latest version from Mongoose, while edited so much better than their first version, is full of fussy design.

Well at least its not black, but we’re not going to be using those pages to mapping out the galaxy so why are the covered in hexes? And that the hell is that metallic-edged starfield at the top and bottom of the page meant to be anyway? An extremely thin window in your spaceship?

Firefly, laid out by the brilliant Daniel Solis, at least pushes the graphic fluff to the edges of the page. And also takes its inspiration from some of the interfaces seen on that short-lived TV show.

The “telephone directory”* tabs on the edge of the page help you navigate the book, and some of the graphic elements are actually there to explain the rules, in this case how the dice pools work.

I like those graphic tabs on the edges of pages, so I get particularly annoyed when some sort of graphic element used there has no point at all. Will the current offender, Symbaroum, please take the stand: This and the entirely unnecessary “parchment” effect spoil an otherwise nice, understated design that lets evocative art take centre stage. There’s even a little design element that I really like on this page. See that little notch in the illustration, up near the top of the page? That appears only where the title in the text is the thing being illustrated, taking the place of a caption.

Readers can do without most of these other useless graphic elements. And the Warren proves it.

Simple, one-column text, using colour to differentiate examples. Full page illustrations on opposite pages, only rarely is their an illustration on the same page as text, and where it happens, frankly it spoils the design. Far better are the quotes from rabbit related literature.

The Warren though, is a short game, and longer texts can make navigation easier with graphics. Fate is, I think, one of the best designed examples.

Telephone style tabs on the page edges work better in this book than in Firefly or any other book they’ve appeared in. I think that’s because of the simple black and white design, which makes for very clear blocks on the closed book. Pelgrane uses a similar feature for Night’s Black Agents, but its less useful there because its impossible to remember which chapter a rule might be in. Another thing I like about Fate is the marginalia, pointing making it really easy to find definitions or related rules. In the PDF of course, these are all hotlinks.

All in all I think Fate is the best designed RPG ever. But that doesn’t stop me giving credit to the clean design of Unknown Armies third edition. 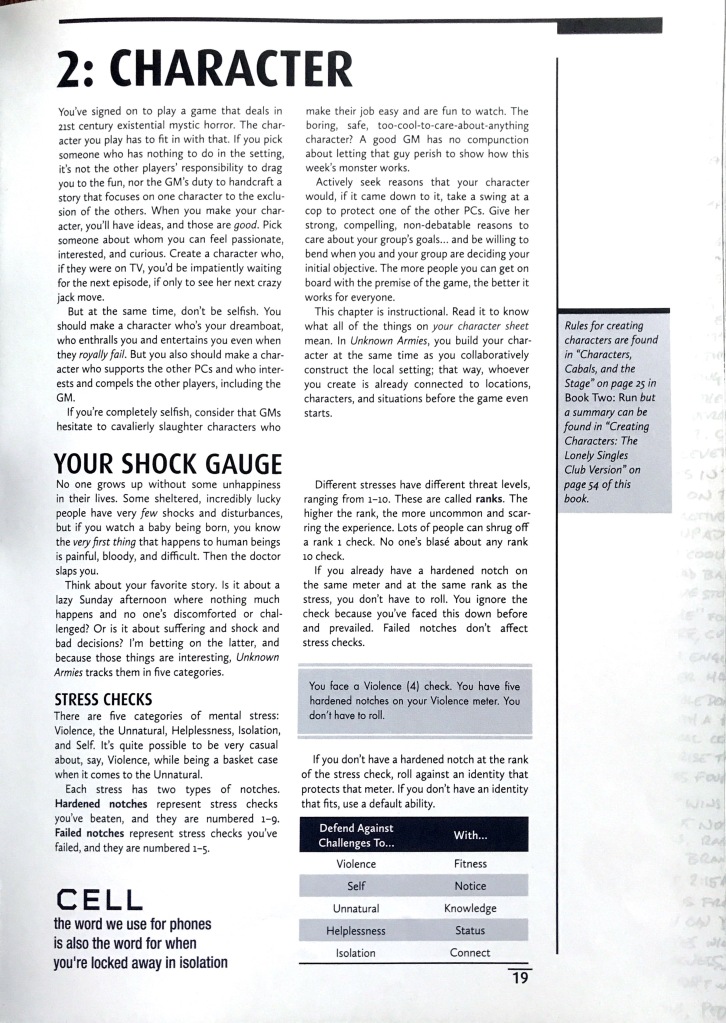 This from a scan of the book, because the PDF is subtly different, with hot links to all the different chapters down the edge of the page. But you can see this uses the margins to point to related rules too. An honourable mention goes to small presser Phil Day’s Sol, which was an attempt to push RPG deign in a different direction, a 21cm tall 9cm wide  pocket sized handbook is all you need to play, with a character sheet on a fold-out back cover. Stark two colour design, showcased some effective black and white illustration. Here’s one double page spread:

But… but the closest I ever came to a jaw dropping RPG layout, I admit, commits most of the sins I rail against above. Not only that, the typeface is a couple of points too small for comfortable reading. I saw this PDF on special offer for just £5, a LOT cheaper than usual. I had no intention of playing it. But I fell in love with it, as I’ve recounted elsewhere. It’s Legend of the Five rings, in all its full colour “lets print a ‘paper’ texture onto our paper” glory.

Now, I run it, I play it, and I’ve spent too much on buying it. Its not the best RPG design, but I think its my favourite.

*A note for younger readers. Once upon a time people had to write down the addresses and telephone numbers of the people they wanted to stay in touch with, in a little book.