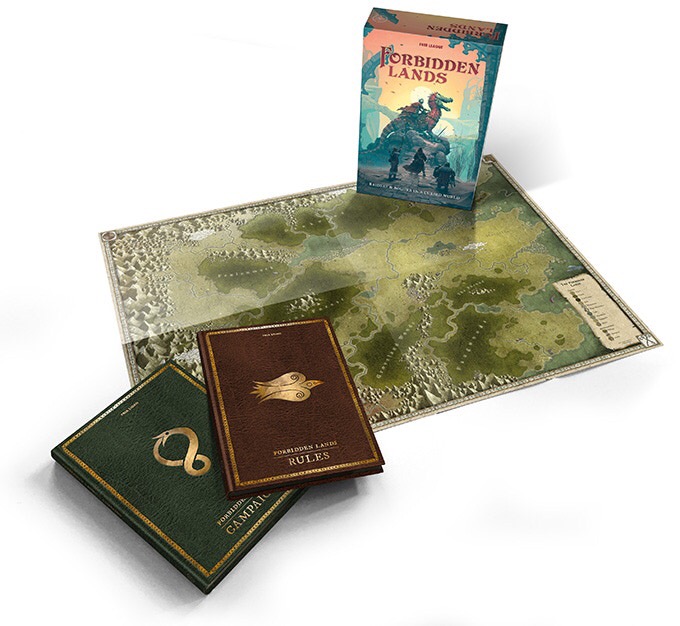 So, the big news this time is the launch yesterday of Forbidden Lands, the fantasy game combining an old school feel and the modern dice mechanics of Mutant: Year Zero (and Coriolis). It launched with a modest SEK100,000 target (very roughly £10,000) at 1pm my time, and by the time I went to bed, fans had already pledged seven times that amount. This morning as I write, 1033 have pledged, and we’re not even 24 hours into the campaign.

The creators, buoyed by the love demonstrated for Tales from the Loop, have once again gone for the eighties nostalgia market. This fantasy epic isn’t set in the eighties though, rather it’s the sort of “wilderness hexcrawl” campaign we all used to play in the eighties, but with the sort of props that weren’t available, at least not to me as a teenager. The campaign map is the sort of open world, bordered by impassable mountains that I might have spent ages drawing out on a sheet of A3, using minimal colour for fear of messing it all up. This one though is full colour and comes with stickers that allow you to place villages, castles and dungeons wherever your players discover them. In the book, the illustrations have an eighties black and white feel and, for Scandinavians at least, will press a particular nostalgia button, as they are actually from early Swedish games.

Player characters start as what we have since come to call “murder-hobos” – amoral adventurers out to seek their fortune, but there are mechanics which will encourage them to build communities rather than just kill goblins and steal their treasure.

One of the first RPGs I ever noticed on Kickstarter was Numenera, from Monte Cook Games. It looked lovely, the illustrations and descriptions evoked Gene Wolfe’s Book of the New Sun.  I didn’t kick in, it has a d20 resolution system that doesn’t press my buttons. It was a a big success despite my abstinence, and Mote Cooke Games have launched a series of well received campaigns since, most recently the deluxe game Invisible Sun. Now they are back for a second bite of the Numenera apple. This campaign funds the publication of two new core books, Discovery, which revises and replaces the original core book (though the promise none of changes make that book or supplements obsolete), and Destiny, which offers additional rules about building communities (rather than just killing … erm Philethis? and stealing their treasure).

To celebrate this new aspect to the game, the Kickstarter campaign has a fun feature wherein backers can help develop the community of Ellomyr, which will feature in another book, The Trilling Shard, as they say in the campaign page “Will it become a thriving city that offers a safe and bright future for Ninth World citizens or will it be lost to the darkness and dangers that threaten it? We’ll only know when this campaign is completed.”

Another quickly funded project is Cavaliers of Mars, from veterans Onyx Path. This is an intriguing take of Burroughs style Planetary Romance that starts with the premise “if Mars has canals it must have Venice!” Using a vaguely Cortex+ style dicepool system, called DEIMOS, it promises a swashbuckling style of play evoking “classic flight scene such as those in The Adventures of Robin Hood, Scaramouche, and The Princess Bride.” I admire their ambition. I’m very tempted and will at least check out the QuickStart rules.

Tiny Dungeon, the simple, quick almost pick up and play fantasy RPG, is funding a second edition, with some nice illustration like that above.

Netflix’s lawyers might be writing to the guys behind Survive This!! Dark Places and Demogorgons, “an OSR RPG set in the 1980s where you play as teenagers from a small town where strange occurrences began popping up all around.” If they do, let’s hope they do so in the way they did to the Stranger Things pop-it bar in Chicago.

I’ve never heard of Battlelords of the 23rd Century, but apparently there have already been six editions, the seventh is kickstarting, and with 42% funding, at the time of writing, if you are a fan, they could do with your support.

I’m not into cyberpunk games, but Identeco looks like one that uses the future to explore today’s issues. The art is inconsistent, but I love the image above.

Finally, I’m taking a punt on what will be the next big thing after Swedish games: Danish games! I have no idea what this game is about, it’s all in Danish, and my Norwegian friends tell me Danish is so difficult even Danes don’t understand it. But if you do, check it out.